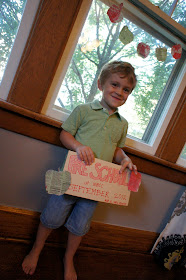 Tuck started going to preschool for part of the day twice a week. 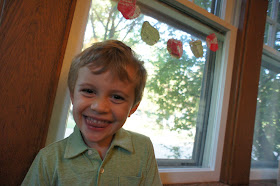 On the first day of "school" last year, I had to step over Tuck's body as he lay across the threshold, crying for me not to go.  This year, in a new room with new teachers, he volunteered to lead movements for the good morning song (despite the fact that he'd never heard it before and hadn't yet learned the routine.)  He labeled his cubby with the letter T, latched onto a small "very pink mirror" and a toy guitar and took off to talk to the classroom pets.  When I arrived for pick up, Tuck was the one, with his teacher's permission, to open the door for parents.  I was down the hall far enough that I couldn't see him, but I could hear his voice: Come on in everybody!  Another parent remarked, "I don't know that kid, but I like his style."

See last year's post, when he began Parent's Day Out.
Andy and Jenni at 10:29 PM