Tuck's current favorite game is rhyming.
Yesterday after his pediatrician asked him what he liked about school and what his favorite animals were, after he told her about goliath frogs the size of rabbits and micro frogs that fit on your fingertip and sticky toed tree frogs, he explained how to play the rhyming game.  Okay, I'll say a word and you tell me something that rhymes.  That means it sounds the same at the end.  Okay, what rhymes with eargloves (he meant ear muffs, but she understood and went with it).  Grrreat, he replied, and they continued back and forth, rhyming words like mom and mirror and watch and window.  It was fun to watch them play.  It's been fun to rhyme with him.
But we played another game recently that may forever be my favorite.  We were outside when Tuck said Mama, let’s play a game. Let’s count every beautiful thing that we see. "Alright Buddy, that sounds fun!" I exclaimed as I looked at him in response, hardly able to get past the first. 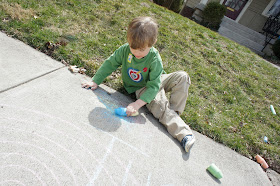