He claps, but I may be his biggest cheerleader. 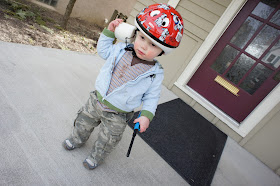 Tollie walked around outside this afternoon with one of last summer's citronella candles and the grill lighter.  He asks every day, with a grunt and an arm fling toward the stove, to light the scented candle we keep in the kitchen.  We light it, he blows it out, and then he claps.  Repeat, repeat, repeat. 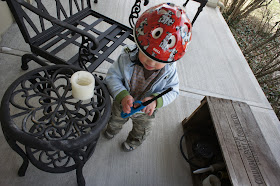 The lighter was turned off, if that makes this game seem a little safer.  And also, he was wearing a helmet. 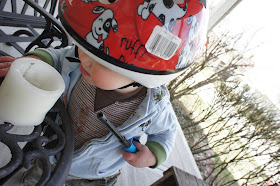 One of the last years I taught, I happened to mention to a few of my fifth graders that I'd always wished I'd been talented enough to be on Broadway, that the thought of people clapping just because I walked on stage was rather thrilling.  It was only a couple days later when I walked into my classroom to receive a standing ovation.  Random, and for no good reason, those ten year olds kept it up all year - they'd hear my heels in the hall and surprise me with rounds of applause I doubt I deserved but that definitely made the school day more fun for all of us. 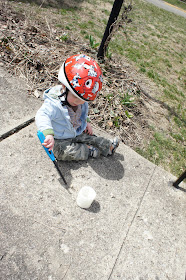 Why don't we have any photos of him clapping?  He claps all day long.
After he feeds himself a particularly delicious bite of dinner and after he asks for and receives a clean diaper, he claps.  After every shot, air balls and toilet bowls and swishes, he claps.  After each round of Wheels on the Bus and after he delivers trash to waste basket, when he dismounts from the couch or leaps over the laundry pile, Tollie claps for himself.  I encourage it, actually, because not everyone owns their strengths as passionately as they own their screwups.  I want him to.  Being alive is such a strange, uncertain journey, we all need as much applause as we can get.  I put my hands together right along with his today.
Andy and Jenni at 10:36 PM