The sun came up this morning.  We watched it stretch over the horizon while we yawned awake.  We decided it would be an Outside day.

Most mornings we try to tell Tucker about the day, what to expect, where we'll go, hoping our previews will help him understand what's in store.  Today we explained that he could play outside, and then, in response to his enthusiasm, proceeded to explain, and explain again, that he could not build a snowman.  Do you see the sun?  It is warm and the snow is gone.  The sun melted the snow. 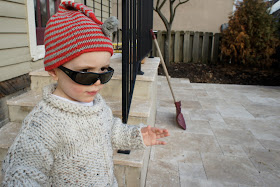 Getting ready to do something, anything, at this stage can feel like wading through peanut butter.  With guided questions, we helped him choose his own outside clothes.  Would you like the blue pants or the brown ones?  Which warm shirt will you put on?  Do you need a hat?  I cringed a bit at the way his sweats were shoved into snow boots when there is no longer snow, and I thought his brown striped hat might’ve looked better with the sweater he picked.  But look at him, I reminded myself, he is a person! With opinions! 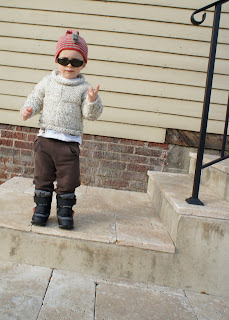 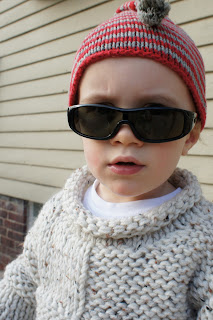 Outside everything became a game, our block a virtual board upon which his attention wheel spun.  He moved ahead four spaces, pocketed rocks, spun again, popped bubbles before they hit the grass.  He trolled the backyard and toured the block, stooped to inspect nuts, squawked in response to birds, shouted hello to neighbors.  He took his sunglasses off and put them on.  Off and on.  Your future is so bright, we said.  "So bright," he repeated.  And it is.  Thank God, it is. 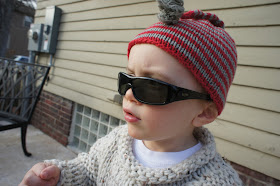 I confess to an absolute fondness for him.  For his budding sense of fashion.  For his slow-getting-readys and his fast fits of wonder.  And for the opportunity to share the future with him.
JEB
Andy and Jenni at 11:47 PM