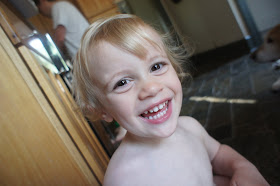 When Tuck has misplaced a toy -say, for example, the rock Poppy sent him that he cannot sleep without- he'll ask "Where is my rock go?"  And when he finds it, he sighs, "There she is."
He dropped coins today, several of which rolled under the couch.  As he collected them, he cried, "There she is.  There she is more."
Lots of people affectionately refer to inanimate things as female - boats, cars, drills, grills...  We're pretty sure Tuck uses the feminine pronoun as a result of asking about Celia.  In the morning when he wakes up, he needs to find her.  When he comes in from playing outside, he wants to know where she is.  When she's with aunts or grandparents over the weekend, he likes to keep track of her whereabouts.  Where is she? and There she is! are part of his everyday lexicon.  Although it's not accurate, or appropriate, I cannot bring myself to correct him.  I like the way his words make me think she is everywhere.  And I kind of hope he says it that way forever.
JEB

For other men who might be interested in keeping Celia with them everywhere they go, CaleCamo released a new design just in time for Father's Day, and they're still donating to BDSRA for all sales that reference CELIA through June 12th.
Andy and Jenni at 9:40 PM