He makes us smile.

It was almost a year ago now, on an extraordinarily hot day, when I pulled my hair up in a knot on top of my head while I bathed both children. Tuck said, “Mama, you're a buffalo.” The following day I had an audition, and threw on a sundress before I left the house. Tuck watched me from across the room as I shifted the skirt into place. He said, “Mama, you’re a princess.”
I didn't record his words then, but I haven't forgotten them.  I'm not sure I'll remember as much as I'd like though, so have made notes on a few things recently. 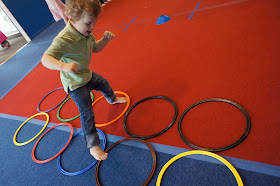 While we were in Iowa, Tucker jumped on a neighbor’s trampoline for what must have been the first time, outside of the gymnastics classes he took right before he turned two. There were at least five children on the trampoline when he got on, and after a moment of everyone jumping and screaming, Tuck stopped, raised his arms out from his sides and yelled, “Everyone! Sit down. Let’s talk.”

At the sculpture park Tuck found a rectangular structure that did kind of look like it could have been a door. After he asked to go in, Andy explained that it was solid and that they couldn’t go in. Tuck said, “Maybe there’s dressing in there too?”   (salad?!)

He introduces himself to EVERYONE – the grocery clerk, the little girl across the parking lot, the bank teller, the same friends he sees every week at school.  “Hi, I’m Tucker Betz, what’s your name?”  But then when we run into someone we do know, someone we’d like him to introduce himself to, he plays shy.

As he dried off last night, Tuck looked around the bathroom. “There are bathtubs at Heaven’s house. And Celie has a pink towel there.”

I put some new socks on him this morning.  His grin grew as he inspected the sea turtles on them.  “Where did these come from?” he asked.  I answered. “We need to write her a note,” he said. (We already did.) But a thank you note. He is grateful.  If he learns nothing else, ever, I don’t care.

When I left him at school today, I explained that I was going to work while he was there. “I’ll see you on TV later,” he assumed. No, but, progress. Last time we talked about work he thought I painted toe nails.
JEB
Andy and Jenni at 11:21 PM