Whatever you are, be a good one * 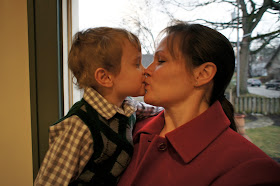 I suppose everyone feels as I do, a similar affection for the people they create. On the cusp of three years, my admiration seems particularly strong.
He is adorable in ridiculous proportions. But he is also tender in all the right places, and tough in some very important ways. He smiles with Junior Mint eyes and a big open-mouth grin, ready to gulp down all the goodness the world has to offer. His handshake -glad, inquisitive, energetic- bespeaks his behavior. He is silly and honest and kind, and there is nothing more that I want him to be.
He makes me stop to study the corn kernels in the bottom of the snack bowl, the ones that didn’t pop, to notice that grabbing the dish soap bottle sends tiny bubbles floating on air, to reimagine a pair of nursing pads as “very quiet cymbals.” Afternoon baths become explorations as he engineers fountains with cups and straws and spare irrigation tubing and I rerun the tap so his hands only become pruny and not blue. He initiates toasts with juice glasses for no reason at all and he sings the tailgating traditional “state” at the end of every song. He reminds me that I am a good colorer, a decent whistler, a fine cookie baker, and how nice a thing each is to do.

I wonder about his future, what he'll do and who he'll be. I see in him such promise, and know that whatever he is, he’ll be great.