We use tape, leftover from one of the projects happening here, to make another race track.  He spends much of the morning vrooming. 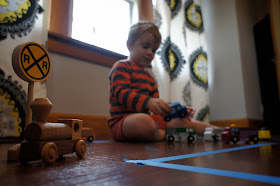 His little brother bounces nearby, lulling himself to sleep with the two beat rhythm of his feet.  He naps suspended, head pressed into a cold teething ring, despite the occasional car crash occurring just inches away.

I pause to check e-mail, to catch up on my favorite blogs.  One admonishes me for allowing the breakfast I ate to determine exactly how much self-loathing I took into the shower.  Another makes me long for my little girl; I quickly click the x, closing the window and quitting the thought.  The third reminds me to see the boys with both eyes, to avert my gaze from nonessentials.  I shut the computer.

We have applesauce and roast beef dipped in hummus for lunch.  It's rainy, so we don't play outside. We do make a quick trip to the grocery.  As I pull in the lot from the back, Tuck points to the drive thru pharmacy and declares it "Celia's store. That's where we got her medicine so she don't be sick."  We sit in the parking lot, still buckled, and shed a shared tear. 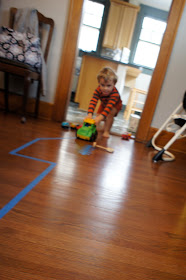 Home again, he spreads alphabet blocks across the floor, stringing a long line of letters together.  His "word" begins with I.  "Look, Mom, I spelled i-i-i-OhioState!"

The boys nap, overlapping just a bit.  I hard boil eggs for tuna salad, wash and cut strawberries, run a load of laundry, pick up my book.

He's not awake long before he discovers a box of brownie mix in the pantry.  He wants to bake - for himself, and for David and John, who are done in the basement and who "did good work."  He carefully mixes ingredients, and colors a quick thank you note while the oven warms. 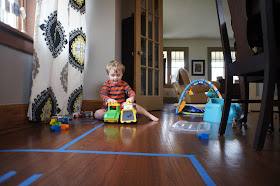 After dinner, he and Daddy unload the dishwasher, making a banjo out of the egg slicer to accompany their traditional pot lid cymbals.  They build a marble machine, sing a showtune, read a book about spiders.  They tickle Tollie and wrestle on the rug, watch Looney Tunes and chase a bouncy ball.

At some point he has chosen his favorite necklace from my jewelry box and when he's hesitant to take it off I ask him to hang it on his bedroom door knob where he can find it when he wakes.  He dances around the room in jammies before I fly him, and his beez, into his big green bed.  He thinks ahead, asking for mango for breakfast, and watermelon.  And maybe a brownie after he eats healthy food.  He wants to go to the library tomorrow, to trade Word World for Rio.
I lie benext to him, thinking about today and tomorrow too, grateful for an average day, hopeful for a million more.