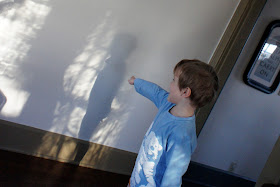 There are no fewer than five flashlights lined up on Tuck's desk.  They've been stationed there long enough that I've had to dust around them.  And there are at least two flashlights in his underwear drawer.
Several days ago a small toy rolled under the piano.  Tucker collected flashlights from all over the house - from under the kitchen sink and from his bedroom and from the back part of the basement - and angled them so they all pointed at the object under the piano.  He was still unable to reach it, but he could sure see it.

Some of Tucker's flashlights have clear plastic discs that fit over the beam, with black shapes that cast shadows, silhouettes of cars and dinosaurs and insects.  He has a book that he likes to read at bedtime, when his room is very dark, that has similar black shapes on clear pages meant to shine light through.  That book usually leads to making a few shadows of our own, splayed hands become birds and folded fingers make wolves.  There's something mysterious and magical about shadows, something primitive, like a cave painting.  There are secret worlds on the walls, not just dark spots with shapes. 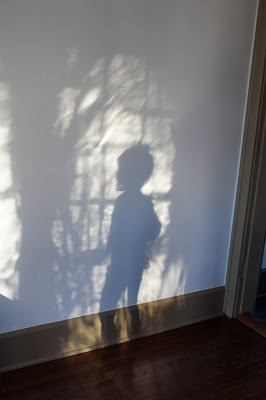 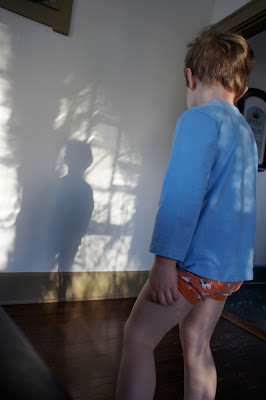 Let his adventures begin with the click of a switch, the flash of a bulb.  In order for a shadow to appear, light and darkness must coexist.  Let there be flashlights all over the place.  Let there be light in this house.
Andy and Jenni at 11:09 PM