when the whole world is the winner

I got a text this afternoon from a friend who was driving home from work and saw a guy with a scraggly beard pushing a stroller with an American flag attached.  She knew it was Noah, and she knew exactly why he was running -- to raise awareness for children with Batten Disease.  From one side of the country to the other, he's making a world of difference. 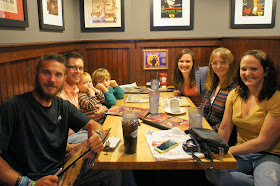 Although we spoke to Noah several times during his first transcontinental run, we hadn't met.  It was good to give him a hug this evening.
Eight days into his first run across America, he called Celia in March 2011.  It was her fourth birthday, and the first day he dedicated his efforts to one child in particular.  I remember holding the phone to her ear so she could hear his voice.  He remembers crouching behind a dune in the middle of the desert, trying to escape the wind so that he could hear ours.  Tonight he got to meet her brothers, and in a few weeks he'll run for her again.  But really, everything he does is for her, and for all us, for the children who are sick, for their siblings, for their parents and extended family.  For a cure. 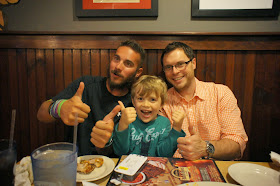 It's hard for Tucker, who is very interested in racing (and winning), to understand that Noah is running alone.  Or that when his feet get wet in the Atlantic ocean, he will win, but so will we.