Several months ago, Tucker found a caterpillar at the pumpkin farm. The fuzzy critter released its bowels on Tuck’s palm, and he promptly named it Mr. Poopy. He proudly showed the caterpillar to other children at the patch, and shared its name with the ones who paid attention. One little boy looked immediately at his mother, who raised her eyebrows and said “We don’t say that word at our house, do we?”

I don’t really subscribe to the idea of good words and bad words. Any word can be used for good or bad effect, any word can impoverish rather than enrich. I was careful not to cuss in my classroom, but I’ll admit, both boys have heard me use unladylike words at home. We don’t swear angrily at each other but we occasionally resort to profanity when we’re frustrated. We will discourage the boys from dropping the F-bomb in polite company, and we will discuss rules of etiquette dictated by society, like maybe not swearing at school or at church. But the tolerance we have for colorful language probably ought to have a correlation to the example we set. There are worse things than kids who curse. 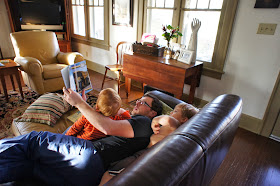 Tucker tells lots of stories.  He makes them up and I write them down, and then we read them together.  And we read lots of books.  He wants to know what words mean and how to deploy them. He has an amazingly extensive vocabulary. And his brother’s is growing fast.

Tollie calls his motorcycle guy a mother fucker. Tucker calls an ill-fitting lego piece a pain in the ass. As both boys dip their toes in the profane end of the language pool, I wonder whether we should identify some forbidden words. I think I’ll be hard-pressed to ever tell them to stop talking. As long as their words do not berate, I can’t quite bring myself to deprive them of even a small part of oral expression.

I’m convinced that mom at the pumpkin patch must teach her son to say shit instead of poop. And I feel certain we’re raising boys who will learn, from us and in spite of us, to raise their words and not their voices.  Or their eyebrows. 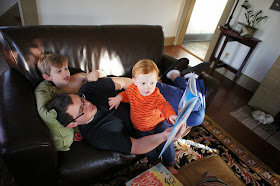