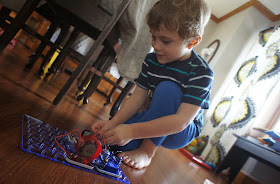 She stays four while he stretches toward five.  Because they share a birthday, the math is easy: we've never had a child as old as he is now.  I get teary-eyed just thinking about it.  He has reached many milestones she did not, so he's seemed older for quite some time, but the crossover was blurry.  As he grew, she didn't.

I got a text from his aunt over the weekend -- he was at an indoor playground with his cousins, and there was a red-headed toddler there, too.  Tuck told the toddler's father that she looked like his sister who was in heaven now. He talks about her all the time.  And when he doesn't, when he tries to hide his feelings, his eyes lay the rest of him bare.

Being a parent is a wondrous act of faith.  The parenting road is long, if we're lucky, and riddled with land mines -- experimenting with electricity and learning to chop broccoli with a butcher knife are quaint concerns in the universe of worry.  We need to register Tuck for Kindergarten next month.  I get teary-eyed just thinking about it. Another quaint concern, a luxury, really.  But I am scared that some of the magic will be educated right out of his soul.  And I'm realizing that parenting may not get easier as the boys get older, just hard in different ways.

I sat in on an intergenerational book discussion about R.J. Polacio's Wonder at church this morning.  (If you haven't read it, you should.)  More than once someone pointed out the ways the fictional parents succeed at parenting.  When you have a child who carries some hurt, physical or emotional, it takes time to navigate which wounds you may be responsible for.  It takes courage to let your child be sad for a while instead of distracting him, and it takes a great deal of trust in something other than yourself to fight the urge to try to fix it.

Sometimes I am struck by the reality of Tuck's sorrow, but more often I am struck by his aliveness.  He habits himself to the dazzle of light, wears his good shoes on a regular basis, pours bubble baths just because.  Talks about his big sister all the time.  He will always be more than himself.

At the candlelight Christmas Eve service last month, Tuck sat with our family instead of attending nursery.  The minister recited a prayer that included the words Jesus Christ.  Tucker said, loudly enough to draw attention from several pews away, "Hey Mom, that's what you say.  Like when I spilled my juice today, you said Jesus Christ."
When we recounted the story to his grandma, thinking quickly on her feet she explained to Tuck that Jesus Christ is a little prayer that lots of mamas need to say out loud sometimes.

I think tears are a mother's prayer, too.