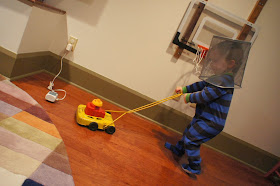 While Tucker works on his pile of "trash to build cool things with," talking about how each invention works, Tolliver wears a metal bucket helmet and mows the rug, talking louder.

Tuck talks a lot.  If Tollie were mute it’d be easy to see his silence as nothing other than inevitable. But he’s not.  He talks a lot too, and maybe that’s partly because his brother talks to him.  Tuck is quick to acknowledge, and take credit for, Tollie's new words.

Tolliver recently stopped calling dinosaurs “da-dons” and began calling them dinosaurs, using all the syllables.  He doesn't call pizza "big piece" any more either.  I’m not sure when the revisions occurred, although I realize they must not have happened on a single day, but over time.

Tollie picked his own outfit the other day, after the boys declared, through the vent between their bedrooms, a getting dressed race.  Donning the gray sweater he’d chosen, Tollie walked into Tuck’s room and proudly wondered: Datuck, Meem look awesome?

He works so hard to string together sentences.  Long ones.  Very imaginative ones.
Tangled in post-nap bed linens he describes what must have been a dream: That big big green frog ate that bumblebee! Or pointing at pictures in his favorite book, Richard Scarry's Cars and Trucks and Things that Go: Uh-oh, the mouse is sad, the mouse crash car.  Big big crash!  Or headed into the dark bathroom for pre-bed potty time: No ghost in bathroom?  Datuck, ghost in bathroom?  Light on, please, check no ghost. 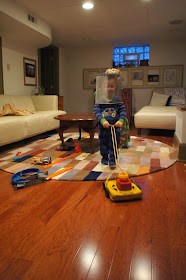 Tollie enunciates every word.  You can see his brain working behind his forehead, see the colorful spinning beach ball in his eyes, a wait cursor while his oral document works itself into a sensible draft.  Although he articulates each syllable as if he were trying to pass an elocution test, his vowels are not perfect and some sounds still prove tricky.  {He has the hardest, most hilarious time trying to say M&Ms.  It's on video.  We really need to share it.} But he is beginning to use filler words, articles and prepositions.  Sometimes, instead of yelling NO! Meem do it! he says, more calmly and less loudly and with very deliberate care, I think I can do it.

He says tax-seat for taxi and sook sack for fruit snack, and upside-done.  And he doubles words a lot.  He calls ketchup dip dip and the Buckeyes Buck-Bucks.  Every big thing is big-big, I'm mom-mom, and WHY AREN'T MEEM CHICKEN NUGGETS READY READY?

Eventually he’ll say most things in a way that people outside our immediate family might recognize.  The adjustments won’t happen on a single day, but over time, I'm sure. And I hope, when we’re old, Andy and I will still be able to elicit a smile when we ask each other, Meem look awesome? 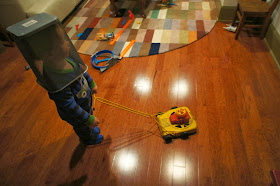