Tucker scrutinizes Lego bricks like a jeweler studying gems.
You can almost see his brain turn into a carnival while he works, lights switch on and flash rapidly.
He's made all sorts of creations at home: back scratcher, dog, telescope, race car, porch swing, pirate ship, police jet, dune buggy, limousine. 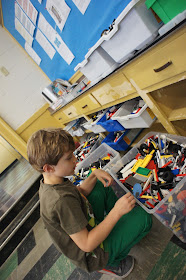 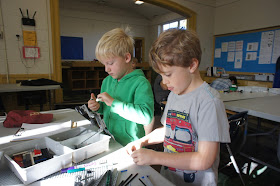 Tucker participated in the district Lego League this fall.  For the past few months his team of first and second graders have gotten together after school and on weekends to construct a model facility - with moving conveyor belts and a robot - that could recycle old television sets.  The robot sorted parts, plastic from metal and wire from hazardous materials like lead, and the conveyor split to take trash one direction and recyclable materials another.  The boys presented their project to judges over the weekend.  At one point Tuck threw some tiny plastic Lego pizzas on the conveyor belt and hollered "Order up."  We've a long way to go on poise and public speaking, I guess.  But he had so much fun throughout the entire process. 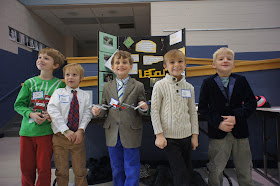 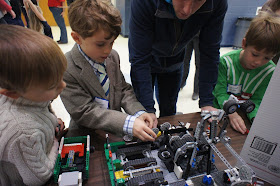 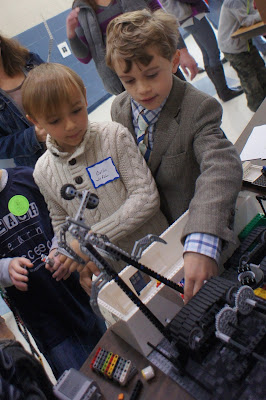 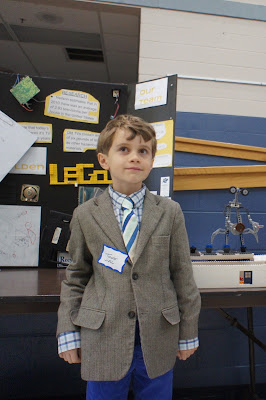 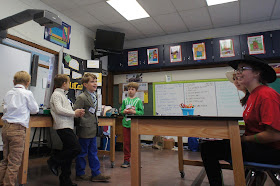 Through involvement in clubs like this, I remember that it's less about what Tuck wants to be when he grows up and more about what problems he might want to solve and what he might want to learn in order to do it.  We're grateful to learn with and from him along the way...
Andy and Jenni at 9:02 PM