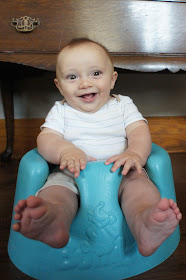 Hank is five months old today.
It seems to me that he grows overnight, every night.
Such a big boy.  Such a good boy.

He has six or eight long hairs right on top, likely original, mixed in with much thicker, darker new stuff.  The light strands stand out like filaments of gold along his crown.
And on the back of his head, Tucker noticed a swirl pattern that makes him think a hurricane landed there.

Hank's pediatrician encouraged us to let him try baby food, and just this week he's sampled cereal and green beans and bananas.

He is generally happy, and is easily entertained.  Smiles erupt regularly, the kind that threaten to consume his entire face.  He tends to reserve the very biggest grins for his brothers.

He is the first baby we've had who prefers to suck his thumb, and not only is it entirely endearing, it is also so easy, the way he manages to find it and soothe himself.  We lay him down at nap time wide awake and watch his routine: he turns over to his tummy, pulls his knees in under his bottom and locates his left thumb, pointer finger curled over his nose, and he's out.

He rolls all over the house now, reminding me of my keys, never where I think I left them.

And when he rests on my chest, I swear I can remember exactly what it was like when his sister laid her head that close to my heart too. 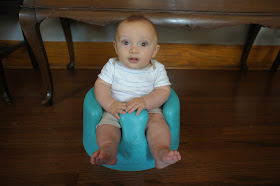