There was a bug on the bathroom floor this afternoon, the long, slinky kind with lots of little legs.  I have to be honest: ordinarily I'd flush it.  But Tucker insisted we carry it downstairs and put it "outside with his family.  He misses his family, now we can put them back together."

Outside we trimmed dead stalks, making room for all the green that's poking through.  He created conversation around a clump of purple crocus, buds no longer hugging shut, before he pulled a significant length of ivy and trailed it around, calling it his "rope from the jungle. I can swing on it, just like George the monkey."

Tuck saved a clear plastic cylinder from the recycling bin a few days ago.  He wanted to "take it outside and find a fly then I can put him in it and look at him then I can find food for the fly and put it in for him to eat then I can watch him eat." 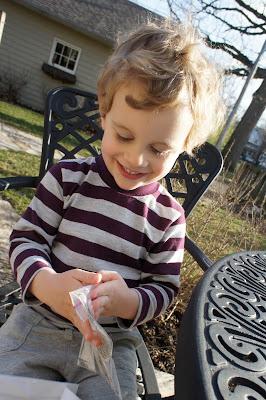 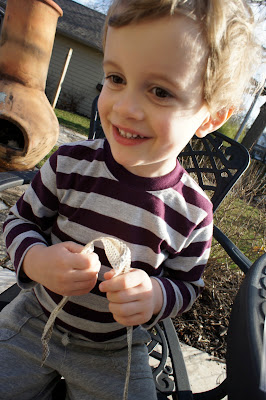 And he recently befriended a corn snake named Steve, whose care-taker saved and sent Steve's spring molt.  Tucker opened the envelope with enthusiastic awe. "Steve took off his coat," Tuck explained to Tollie, as he gave his little brother "a turn to touch it, don't be scared." 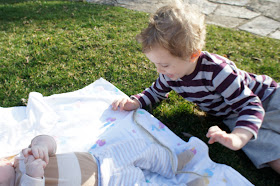 Working with the inertia of life with a little one, letting him get his work done instead of worrying about my own, is satisfying.  He turns hollow husks into telescopes and paper plates into hats and, um, snake skins into mustaches.  He is curious about nature, and creative with its bounty, his imagination tripping on the heels of imitation. 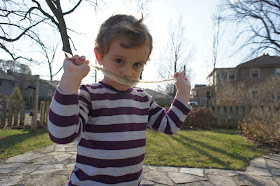